Voting against the Bedroom Tax

by Richard Burden on 9 September 2014 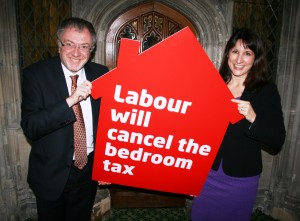 I’ve been contacted by many local people who have told me that they are struggling to cope with the hated bedroom tax, introduced by the Tories and Liberal Democrats in Westminster. The Bedroom Tax is affecting over 13,000 households in Birmingham and over 1300 in the Northfield area alone.

People receiving housing benefit, who live in council or housing association homes with a spare bedroom, face a choice between paying £600 more a year or moving home. But as I know all too well from my constituents, there often is not the choice.

The truth is there aren’t enough smaller homes for people to move into. Over 99,000 families in the UK are expected to be affected by the bedroom tax, but there are only 3000 one and two-bedroom social housing properties ready to move into. That mean’s many people are being forced into the private sector, and simply cannot afford the increased rent.

That means the Bedroom Tax is failing to achieve its purpose of reducing the benefits bill. In fact, by pushing people into privately rented accommodation – where they need further housing support due to higher costs – it’s increasing the cost of housing benefit.

That’s why on Friday I joined 305 fellow MPs to pass Andrew George’s Private Members Bill, which would make certain categories of households exempt from the Bedroom Tax. Unfortunately, this falls short of the full abolition that I and the Labour party would like to see, and will do if we are elected next year.

But it’s a step in the right direction and I welcome the Liberal Democrats voting with us on the Affordable Homes Bill. Sadly it’s come too late for the thousands of people who’ve been forced into debt, and are the mercy of private landlords as a result of the Bedroom Tax. And the truth is that the Liberal Democrats have repeatedly joined the Tories to keep the Bedroom Tax in place, and have previously resisted any attempt to protect people from it.

The Labour Party has been clear and consistent in its opposition to the Bedroom Tax. It is an unfair and unworkable policy that causes misery to hundreds of thousands of people by forcing them out of their homes. The only way to full abolish the Bedroom tax is to elect a Labour Government next year.