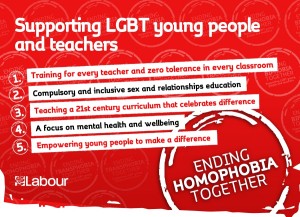 A local resident  from Kings Norton has recently launched a petition about the need to tackle homophobia in schools across the UK.

Addressed to the Prime Minister David Cameron, and Secretary of State for Education Nicky Morgan MP, it calls on the Government to make tackling homophobia in schools a top priority – including through education of pupils about non-heterosexual relationships, and training for teachers to deal with homophobia.

My constituent has raised concerns about the commonplace use of homophobic language in classroom – and the way in which Lesbian Gay Bisexual and Transexual (LGBT) young people are being bullied simply for who they are. As my constituent says, what is really worrying is that this bullying often goes unrecognised.

That is why I am pleased that Labour’s Shadow Secretary of State for Education, Tristram Hunt MP, has launched a ‘zero tolerance’ plan to tackle LGBT bullying in schools – with every classroom, dinner hall and playground free from homophobia. Under this plan, Labour will:

It is unacceptable that homophobia in school environments is going dismissed. Homophobic bullying restricts learning and causes long term damage and hurt to too many young people today. It should never be ignored, and that’s why it is good to hear that my constituent is taking action to raise awareness of this very troubling problem.