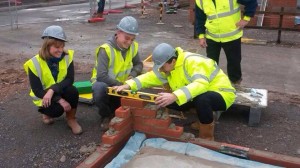 Poor old George Osborne. His government’s privatisation of Royal Mail seems to be hitting his own department even harder than the rest of us. Can you imagine – a letter he sent from his office in the House of Commons to another MP’s office took no less than five days to arrive? And guess what? The office which did not receive the letter for so long was mine.

There is a Parliamentary convention, you see, that when a Minister is going to visit another MP’s constituency, he or she should tell the MP in advance. Imagine my surprise, therefore, when I learned through Twitter last Monday evening (October 6) that the Chancellor of the Exchequer had been to visit a housing development in Kings Norton that afternoon. So I e-mailed George late the same evening to find out what had happened. Amazingly enough, the following day, (October 7), a letter arrived at my office telling me that the Chancellor was planning to visit Kings Norton’s Barratt Homes development on October 6. The letter was dated October 2. If George Osborne is really having such difficulty with the postal system, maybe he should complain to those to whom he sold Royal Mail for a song last year. Or maybe he could even discover he can actually communicate with other MPs by e-mail?

I’m sure the Chancellor was most disappointed not to have me there to greet him when he turned up in Kings Norton for his photo opportunity, complete with hard hat and spirit level. Still, all was not lost. The postal system seemed to have worked fine for the Conservative Candidate for Northfield, who was on hand to cheer on the man who has presided over the worst cost of living crisis in a generation.

Still, it was not all plain sailing for George. Even if very few people seem to have actually seen the Chancellor during his visit, the responses he got from people in South Birmingham and elsewhere once he started tweeting about it were -well- not exactly effusive.

I would have liked to see him though. Parts of Kings Norton are some of the most deprived places in Birmingham. I could have shown him some of these and asked him why, in the light of what he saw, he thinks it is fine to cut government funding for our city at over twice the national average. Or -as he was visiting a housing development- I could have asked him why, under his government, house-building in Britain hit its lowest peacetime levels since the 1920s and whether he would not do better to adopt Labour’s plan to build 200,000 homes a year.

I would have liked to have introduced him to some of the people living just down the road from where he visited who are struggling with soaring energy bills or who have been hit with the bedroom tax.

But it wasn’t to be. George Osborne evidently prefers smiley pictures with a cheerleader from his own Party. I guess that is up to him. But he should still check why he seems to be having so much trouble with the postal service.