by Richard Burden on 3 September 2014 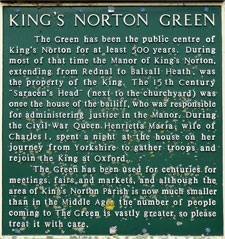 Today I have written to Sainsburys to flag a range of serious concerns about their proposal to build a new store in the car park of the Navigation Inn in Kings Norton, at the junction of Wharf Road and Pershore Road.

Last night a public meeting held in Kings Norton also expressed real worries about the construction of the proposed Sainsburys store on the Navigation Car park. Although my duties in Parliament prevented my being there personally, I am grateful for the feedback from the meeting which I have had from local residents who are a vital of Kings Norton’s local Labour team, linking with both Labour Councillors and me as MP. I have tried to reflect that feedback from the meeting in my letter to Sainsburys.

The first problem is the potential impact on the vitality of Kings Norton Green as a community and business hub for the area. The Navigation is separated from the Green by the main Pershore Road and by diluting the focus of retail outlets away from the Green itself, I cannot see what the Sainsburys store would do other than undermine the village ethos which Kings Norton has retained. That focus has been added to by the Lottery-funded historic St Nicolas place Restoration project, and it is reinforced by the presence of a Farmers Market on the Green once a month. Of course, there may be competition between market traders and some local shops on those Saturdays when the Farmers Market is on – just as there is daily competition between different shops and cafés.

But the focus remains on the Green itself as a local centre. People going to the shops can easily pop over to the Market. People going to the Market can easily pop over to local shops. It is all still one identifiable local shopping area. However, a Sainsburys development on the other side of the Pershore Road would undermine that sense of “place”.

The second problem relates to the Navigation car park itself. As well as being a car park for the pub, on weekdays it is regularly used as parking for parents for dropping off children at Kings Norton Primary school. That is one of the things that reinforces continuing support in the area for the Navigation, which retains a reputation as a community pub. I think that losing those parking places to a store would undermine that reputation and cause major problems for parents. With existing parking issues in the area, I can see this could involve more danger for children, not only greater inconvenience for parents and staff. In fact, I can still foresee dangers to children even if Sainsburys/the Navigation agreed to allow parents and staff to continue to use a smaller car park on the Navigation site.

There are already local concerns about the amount of traffic in that part of Pershore Road, about parking problems and about difficulties crossing the road – particularly since the school no longer has Peggy, who was the “lollipop lady” there for so many years. I know these issues also featured at yesterday’s public meeting, as did another planning application from the Co-op to build a store on land they own between Pershore Road and Kings Norton Green itself. I had a preliminary discussion with the Co-op about that when they held an exhibition about their plans a while ago. I hope to meet them again, as well as meeting Sainsburys about their plans. For now, though, I thought I would do a quick report back on the letter I have sent to Sainsburys.

If you were unable to attend the public meeting, you can still submit your comments on the planning application until the 18 September. Find out how to contact Birmingham City Council’s planning department here.

And as always, if you would like to give me more views or feedback on this issue I would be very pleased to hear from you. Find out how to contact me here.