On the eve of the Chilcot Report

Tomorrow, the Chilcot Report into the Iraq war will finally be published.

Ahead of publication, my thoughts have gone back to how it felt in the House of Commons – and outside – at the time. Sometimes it is easy to get hindsight mixed up with what we knew at the time, as we approached a conflict that was going to have such a profound effect on the Middle East and beyond. It was a conflict which also was to have a big impact on way politics and politicians are viewed today.

So I have revisited some of what I was saying and writing at the time. Here is a letter I wrote to Tony Blair some seven months before the invasion started, setting out some of my concerns about the course he was on. Below are also links to a couple of speeches I made to Parliament – one also in September 2002 and one in March 2003 just a week before the invasion.

I was one of the 139 Labour MPs who opposed the war and voted against the government in the House of Commons on 18th March 2003. Another was the late Robin Cook. British politics is the poorer without him. And we – his friends in the Labour family – particularly miss him at this time of new political turmoil. 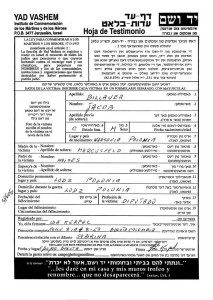 Some years ago I was approached to become a “Guardian of the Memory”. Established by Yad Vashem, the world centre for Holocaust research, the idea is both simple and powerful.

There were 6 million Jewish victims of the Holocaust. 1.5 million of them were children. The Guardian of the Memory project recognises that each one one of those who died has a right to be remembered by someone to ensure they will never be forgotten nor their existence denied.

Like me, Jacob Billauer was an MP. He was born in Warsaw and his father’s name was Moises. We know Jacob was married but we don’t know the name of his wife. We do know that, prior to and during World War Two, he lived in Lodz, Poland. Jacob Billauer was murdered. He was one of the six million.

We know about him because his niece, Ida Karpel, lodged a page of testimony with Yad Vashem. Every year I remember Jacob Billauer on Yom HaShoah, the annual Jewish Remembrance Day for those who died during the Holocaust.

Today is Yom HaShoah and today I remember Jacob Billauer.

You can also become a guardian of the memory of one person who died in the Holocaust. Find out how here http://guardianofthememory.org/

On Tuesday (15 March) I held a debate in Parliament calling on the Government to speak the truth on new anti-boycott rules which many fear represent an unprecedented attack on democracy.

The rules, announced last month, by a Government minister during a visit to Israel – without any parliamentary or public scrutiny – aim to ban public bodies including local councils and universities from refusing to award contracts to certain companies on ethical grounds.

END_OF_DOCUMENT_TOKEN_TO_BE_REPLACED

Today, Yuli Edelstein, Speaker of Israel’s Knesset addressed MPs in a meeting hosted by the British Group of the Inter-Parliamentary Union. Follow the link to read my question to him.