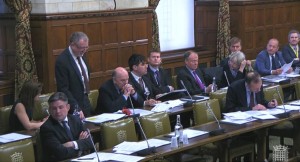 On Tuesday (15 March) I held a debate in Parliament calling on the Government to speak the truth on new “anti-boycott” rules which many fear represent an unprecedented attack on democracy.

The rules, announced last month, by a Government minister during a visit to Israel – without any parliamentary or public scrutiny – aim to ban public bodies including local councils and universities from refusing to award contracts to certain companies on ethical grounds.

The motive behind the changes are targeted at councils who have chosen to end trade with Israeli settlements and the arms trade. It might seem odd to write my Westminster diary about international affairs that you may think have no bearing on any of us, but in fact these changes go much further in scope, and at their core, undermine and contradict fundamental principles about democracy and local decision-making.

Ethical investment decisions are often seen as good business practice in the private sector. For local councils, it can be particularly important to community cohesion for procurement and investment decisions to contain ethical dimensions. For example during the 1980s a number of councils chose to boycott firms associated apartheid in South Africa as a sign of solidarity with a people who were unfairly discriminated for the colour of their skin.

Under the new anti-boycott rules, elected local councils and representatives could lose the freedom to refuse to buy goods or services from firms which not only may be involved in illegal settlements in the Occupied Palestinian Territories or the arms trade, but also those which promote fossil fuels or tobacco. They too would have outlawed the actions of councils against apartheid.

The restrictions on local councils when making their own decisions also flies in the face of the Government’s commitment to devolution. Did you, like me, not think the whole point of devolution was to empower local decision-making and decentralise control? Instead it seems Government Ministers only support local decision-making when decisions match up to what they want.

What is equally shocking is that the Government have chosen not to consult parliament or the public on these changes before introducing them. There has been no public consultation and despite numerous requests from myself and other MPs, they have refused to even make the announcement formally in parliament. My debate will in fact be the first chance for ministers to be held to account on the rules.

Perhaps it’s no surprise to see the Government so unwilling to listen to genuine concerns about banning ethical boycotts. After all choosing a highly politicised agenda over consulting the public is in itself unethical and shows pure contempt for our democracy – just like the ban.

You can watch the debate below or read the Hansard here.