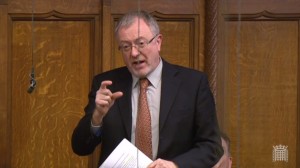 Today, MPs had the opportunity to question the Prime Minister about his proposal for the UK to directly participate in air strikes against Daesh (ISIS) in Syria. I set out my thoughts on the issue of military action in Syria in a piece I wrote two months ago. Given the threat that Daesh poses to people of all faiths and of none in both the Middle East and closer to home, it is only right that we   review the whole question in the light of the chilling events in Paris just a couple of weeks ago, in Beirut in the days before them and in the skies over Sharm El Sheikh before that.

For over a year now, British aircraft have been involved in military action in Northern Iraq since Daesh advances in that area led to massacres of Yezidis and others in the summer of 2014, and threatened to massacre thousands more. Along with allies, British air strikes have been used in Northern Iraq at the request of the Iraqi government and in support of Iraqi and Kurdish forces fighting Daesh. Britain has also been providing reconnaissance and other support to US, French and other aircraft hitting Daesh just over the border in Syria. Until now, though, UK aircraft have not had a combat role there. Over the past weeks, my position on the question of whether UK aircraft should extend their combat role from Iraq to Syria has remained broadly the same as when I wrote the piece I mentioned above.  This piece, written by my Labour colleague Dan Jarvis MP earlier this week, also asks key questions which I believe must be addressed ahead of any decision about whether or not to extend the UK’s air combat role into Syria.

Parliament’s cross-party Foreign Affairs Committee asked similar questions in another recent report. The Prime Minister’s statement today was in response to that report. You can read the statement and the questions from MPs which followed here. Below is my question to the Prime Minister about his plans from that debate.

The Prime Minister also previously made a statement last week – you can watch a short clip of the question I asked him in response from then here:

There are two new key developments which have taken place in the past week which I believe are highly relevant to the decision about whether or not UK participation in air strikes against Daesh should extend beyond Iraq into Syria. One is the limited but significant diplomatic progress now being made at talks taking place in Vienna towards a framework for a negotiated end to the civil war in Syria. The other is the unanimous vote at the United Nations Security Council last Friday calling on all states to take “all necessary measures” against Daesh. You will see more on both of those issues in the report of the debate surrounding the Prime Minister’s Statement today.

Decisions about war are probably the most serious any MP has to make. The likelihood is that the decision about whether or not UK air strikes should be extended into Syria will soon come before the House of Commons. I hope the above along with the links I have included gives you an idea of the considerations that will be in the forefront of my mind as I decide how to cast my vote. I also want to hear from constituents about your views so please let me know what you think.