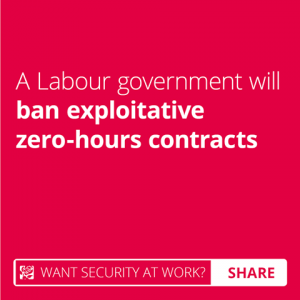 Millions of people in this country are struggling on low pay at the moment. The economy may now be recovering – but it is the slowest recovery the country has seen in a hundred years and I know that many people in the Northfield area just are not feeling the benefits of it all. People are on average £1,600 a year worse off since the Conservative-led Government was elected in 2010.

Far too many of the jobs that have been created here in the past five years are low paid, part time, temporary or on zero-hours contracts.

This area has the highest number of people being paid less than a living wage (which is currently £7.85 an hour) in the entire country. Over 60% of women living in this area are not paid a living wage. I know people are working hard, but when energy bills and food prices have risen so much over the past few years, people just are not being paid enough to provide properly for themselves or their families.

But when asked about this issue David Cameron just said “never mind zero-hours.”

Labour has committed to do three things to help make work pay:

1.      We will ban exploitative zero-hours contracts

Labour will guarantee that if you work regular hours you will get a regular contract.

2.      We will raise the national minimum wage

Labour will raise the national minimum wage to at least £8 an hour by 2020. And we will increase fines for those companies who fail to pay it too.

Labour will give tax incentives to businesses who sign up to pay the living wage. Birmingham’s Labour Council already pays it’s 2,834 employees the living wage, and 179 companies have signed up to the Council’s Charter for Social Responsibility to pay it too.

There are real differences between Labour and the Conservatives on work and pay. And there is a real choice to make in the election – which is just three weeks away. Remember that the last Labour Government introduced the law creating a national minimum wage in 1997, but the Conservatives opposed it.

We urgently need a fairer economic plan that will deliver better jobs, wages and living standards for people in Northfield. That is why it is so important to vote for me as your Labour MP, and elect a Labour Government, on the 7 May.