I was proud to speak last week at the launch of’s theme to commemorate the 23rd anniversary of the Srebrenica genocide. The theme, “Acts of Courage” pays tribute to the ordinary Bosnians who took great risks to protect others during the conflict in the 1990s, as well as those who have the courage today to speak out about what happened. These acts of bravery, heroism and determination to resist hatred continue to provide inspiration today.

The Srebrenica genocide was the worst massacre to take place on European soil since World War Two. It provides us with a power reminder of the importance of commemoration not only to honour the dead and survivors of the genocide but also to harness the powerful lessons Srebrenica teaches us so we can create better, more cohesive communities here in the UK. END_OF_DOCUMENT_TOKEN_TO_BE_REPLACED

Richard Burden MP, Chair of the Britain-Palestine All Party Parliamentary Group, has today written to the Foreign Secretary Boris Johnson concerning US President Donald Trump’s recent announcement of his decision to recognise Jerusalem as the capital of Israel.

A cross-party group of 90 Parliamentarians have added their names to the letter to express their collective concern regarding President’s Trump decision and to ask the Foreign Secretary to ensure UK leadership in the pursuit and facilitation of a just and sustainable peace between Israel and Palestine with Jerusalem as a shared capital.

“As a cross-party group of MPs and Peers we have written to the Foreign Secretary to express our collective concern at President Trump’s decision to recognise Jerusalem as the capital of Israel. Jerusalem is a holy city for Jews, Christians and Muslims alike, and there has long been consensus amongst the international community that the city’s status can only be settled fairly through negotiations.

President Trump’s decision to move the US Embassy to Jerusalem is provocative, it undermines the ability of the US to credibly broker talks between Israel and Palestine and it will only fan the flames of conflict at a time when international efforts should be focussed on reducing tension, upholding the rule of law and promoting peace.

We are calling for the UK to show leadership in the pursuit and facilitation of a just and sustainable peace between Israel and Palestine with Jerusalem as a shared capital of both states. The UK must demonstrate in deeds as well as words that respect for international law and a commitment to equal rights for both Palestinians and Israelis must be cornerstones of a new UK proactivity and leadership to achieve peace. We believe it is in the best interests of pursuing peace, for the UK to now recognise the State of Palestine, in line with the decision of the House of Commons as expressed on 13th October 2014.”

As Chair of the Britain-Palestine All-Party Parliamentary Group, I follow closely the human rights situation in Israel and the Occupied Palestinian Territories. This includes human rights defenders peacefully exercising their rights to freedom of expression and peaceful assembly – rights that are enshrined in Articles 19 and 20 of the Universal Declaration of Human Rights.

Two such people are Issa Amro and Farid al-Atrash. Issa and Farid are two Palestinians who campaign against the construction of illegal settlements by Israel in the occupied West Bank. Farid is a lawyer and Issa is coordinator of the Youth Against Settlements group. Both are firm believers in non-violent protest. Amnesty International have described how during one such peaceful demonstration on 26 February 2016 in the Palestinian city of Hebron, Israeli forces threw sound bombs and fired tear gas at protestors.

Farid was arrested at the demonstration and Issa was arrested the day after. They now face trial in a military court on charges including participating in an illegal demonstration and attacking soldiers. They both deny the charges. In fact, video footage shows Farid holding a poster in front of an Israeli soldier before being pushed and violently arrested. Issa, meanwhile, has spoken of being beaten by Israeli police while in custody.

On Wednesday I attended Amnesty International’s annual Human Rights Day Reception, which took place in Parliament. The cases highlighted at the reception showed the wide range of people who are human rights defenders across the globe. They can be community leaders, journalists, teachers, farmers, poets, lawyers, students, politicians, health professionals or they may come from any other walk of life. Yet Amnesty International have documented an increase in attacks against human rights defenders globally. Sometimes this can take the form of harassment. Sometimes they are jailed. In some places they face torture and even death for upholding rights we take for granted here in the UK. Their courage is inspirational.

Yesterday’s Human Rights Day reception was an opportunity for me not only to voice my support for Issa Amro and Farid Al-Atrash but also to pay tribute to the vital work Amnesty International does more generally to shine a spotlight on the persecution of human rights defenders wherever they are, in documenting what is happening to them and in letting them know they are not alone.

You can take action too by sending a message of hope to Issa and Farid at https://www.amnesty.org.uk/write-for-rights/action/issa-amro-and-farid-al-atrash 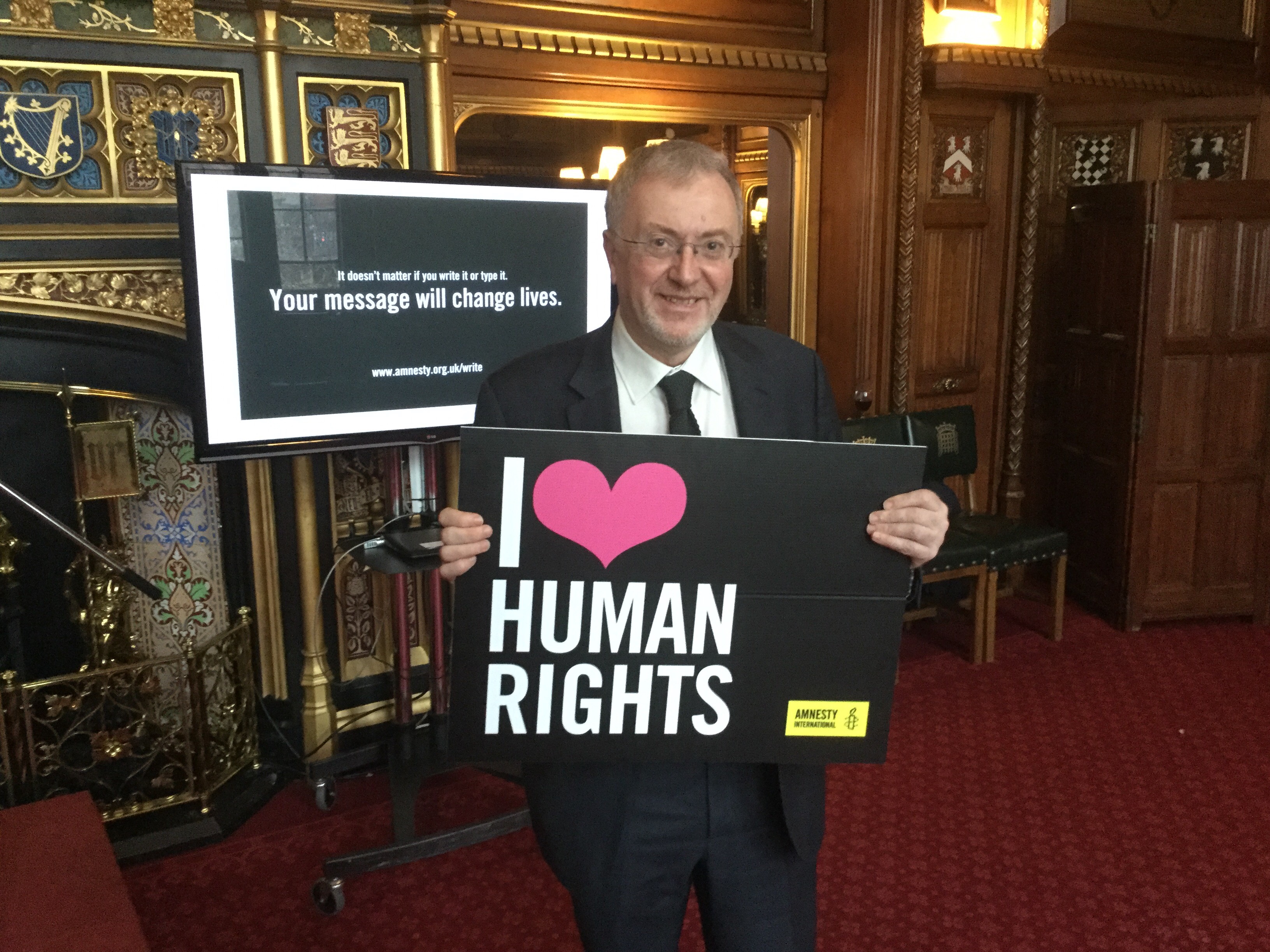 Safety Must Be Top Priority, But UK & US Bans on Passenger Electronics on Aircraft Leave Questions Unanswered

“Safety and security of passengers must always be the overriding priority for Government and for airline operators. If the Government has evidence that the level of security checks on passengers carrying electronic devices is of exceptional concern in the countries they have listed, then it is right that prompt precautionary action should be taken.

“This announcement does however leave a number of important questions unanswered and we are seeking urgent clarification from Ministers on these points. It’s important the Government set out clearly the precautionary steps they have taken in response to advice from security services to reassure passengers and the public. The Government must also work with airline operators to ensure all passengers are given the necessary information and flights can continue where appropriate with as minimal disruption as possible.”

END_OF_DOCUMENT_TOKEN_TO_BE_REPLACED

Residents living close to North Worcestershire Golf Course will know that at the end of February, Bloor Homes withdrew their planning application to build on the golf course. However they have now said they will be submitting new proposals shortly. In their latest notice they have said their new proposals are aiming “to address the concerns raised during the determination period. The amount of housing has been reduced and additional public space is now proposed.”

Locally, there has long been widespread opposition to building on the Golf Course and this has been reflected in cross party opposition amongst elected representatives of the area too. The City Council’s current Planning framework also opposes redevelopment and, had Bloor proceeded with their recent application, Planning officers were recommending refusal by the Council’s Planning Committee. Last year, the Government’s Planning Inspector also reviewed the overall Plan or Birmingham and also said he was not persuaded of the case to overrule the City Council’s policy in opposition to building on the site.

The news that we feared from the Government has been confirmed, Birmingham schools are set to lose a staggering £20m END_OF_DOCUMENT_TOKEN_TO_BE_REPLACED