The warnings Bosnian gravestones carry for us in 2016

Below is a copy of my article in the New Statesman on my recent visit to Bosnia. 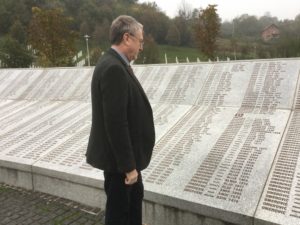 Two weeks ago, I joined a visit to Bosnia organised by Remember Srebrenica. If you have ever seen one of the Commonwealth War Graves cemeteries in Northern France, you will have a sense of what the cemetery in Potocari, near Srebrenica, is like. Row upon row of identical white headstones stretching into the distance. Whereas in France, of course, most of the headstones are marked by the cross, in Potocari they are white obelisks. Overwhelmingly, they mark the graves of Muslims.

In the 1990s, the old battery factory of Potocari was the headquarters of Dutch troops. They had been deployed to uphold the United Nations designation of the enclave as a safe area. Their presence, however, did not stop Serb troops from rounding up around 25,000 people sheltering at the base in July 1995. Once the UN troops stood aside, families were divided. Most of the women and children were loaded and sent west to areas of the country still controlled by the Bosnian government. The men and boys were loaded on to separate trucks. Within days, most of them were systematically shot.

Many other men and boys had already taken to the woods to escape, only to face shells, snipers and ambush on the way. Some, like 19-year-old Hasan Hasanovic, made it through to free territory around Tuzla. Many did not. Those did not die in the woods were either persuaded to give themselves up, or were captured. Like the men and boys who had been taken from outside the UN base at Potocari, most simply disappeared. To this day, their bones are still being found in or near mass graves in eastern Bosnia.

And so, 21 years on, I met Hasan at Potocari. July1995 was the last time he saw his twin brother Hussein, his father Aziz or his uncle, Hasan.

The former UN Secretary General Kofi Annan described the Srebrenica massacre as the worst crime on European soil since the Second World War. Indeed, the word massacre doesn’t convey the enormity of what happened. Earlier this year, the International Criminal Tribunal for the former Yugoslavia found 1990s Bosnian Serb leader Radovan Karadzic guilty of involvement in genocide. The verdict in the trial of military leader Ratko Mladic is expected later this year.

Nobody who visits Potocari can fail to be moved by what you see there. For me, it brought back memories of how, as a new MP back in the 1990s, I was one of those calling for more assertive international action to stop the carnage that was unfolding in Bosnia. It was an unfamiliar position to find myself in. All my political life until that point, I had been amongst those opposing involvement in military action abroad. Now I found myself supporting intervention. For three years before the Srebrenica genocide, people in Sarajevo had been starved of food, medicines and even the means to defend themselves as their city was remorselessly pounded from the hills that surround it. We knew it. We could see it on TV. We also saw that neither Europe nor NATO nor the UN were taking action that could have stopped it.

There were always so many geopolitical reasons not to intervene effectively. I heard them day after day from Ministers in the House of Commons. But that did not help the men, women and children who were dying in Sarajevo, and in 1995 it did not save Hasan’s twin brother, his father, his uncle or the 8,000 others who ended up in the mass graves around Srebrenica.

Since I have returned from Bosnia, two things keep dominating my thinking. The first is about Syria. The political circumstances that have led to the destruction of Aleppo today are not the same as those facing Sarajevo in the 1990s. For people trapped there though, the parallels must feel much more real than the differences. I don’t claim to have an off-the-shelf action plan for what the international community should do today any more than anyone else does. I just keep thinking how in twenty years’ time, people visiting Aleppo – hopefully reconstructed as Sarajevo has been today – will ask: “How could the world have let this happen in 2016?” What will be our answer?

The other thing that dominates my thoughts is that the genocide in Bosnia hit people like me. A man I met, who unexpectedly found himself becoming a soldier in 1992, told me how, before the war, he wore a t-shirt, jeans and an earring. On a good day, he would to listen to the Ramones. On a bad day, it would be the Sex Pistols. I am a bit older than him, but this was still my generation. And it happened In Europe.

What is more, the murders and the ethnic cleansing were not committed by strangers. So often, they were committed by neighbours. These were normal people who had been whipped up to dehumanise those who they were told were “different”. They were told that their way of life was under threat. They internalised it. They believed it. And, down the line, they no longer needed persuading it was “them or us”.

Most of the time, xenophobia does not lead to the horrors that have scarred Srebrenica forever. But it can do. That a lesson for all of us must never forget. So next time you hear someone talking about people living either down the road or across the sea being “them” not “us”, don’t shrug and walk away. Speak up and speak out instead.