Why Labour will scrap the Bedroom Tax

I think one of the things about the Tories that is really getting up people’s noses in this election is their arrogant complacency about what life is like for everyday people.

Whether it’s David Cameron or George Osborne nationally, or their cheerleaders seeking your vote here in Northfield, they want you to believe that everything is going splendidly and, as for issues like the bedroom tax, well, they might as well not exist.

Tell that to Rachel and Anne Marie, who Shadow DWP Minister, Helen Goodman and I met with in Mantelli’s cafe, Kings Norton last week.

Rachel has two children, aged 4 and 10. She is a care worker on the minimum wage. She recently had her hours cut and is now losing tax credits too. She is also being asked to pay £14 per week Bedroom Tax. It’s difficult for her to make ends meet.

Anne Marie, from Frankley, is also being charged Bedroom Tax since her marriage split up and her son left home. She is disabled. Her case exposes the hollowness of Tory claims that the Bedroom Tax does not hit people with disabilities. My office has been making representations on her behalf and she is getting some discretionary help from the Council. But this is short term and she does not know what the future will bring. 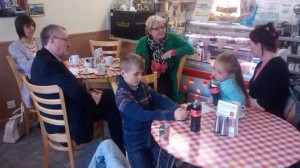 The Tories have given millionaires a tax cut but Rachel’s and Anne-Marie’s stories show how tough it is for thousands of others in our city. In Northfield constituency alone, over 1,500 are already being hit by the Bedroom Tax. If the tax stays in place that figure will only rise the coming years.

Labour will scrap the Bedroom Tax.