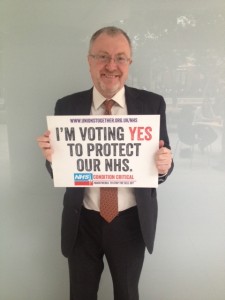 Scores of local people have written to me over the past few weeks to ask where I stand on our NHS – whether I will fight privatisation and support a well-funded, public health service in the future.

Put simply, as your Labour MP I will back the NHS as a public health service and ensure it can provide the care we all rely on.

I am absolutely committed to protecting our NHS for the reason the Labour Government created it in 1948 – a national health service based on need, not the ability to pay, and one which is available to everyone – rich or poor, man, woman or child. I believe there is a very urgent need to protect these values and to restore the right ethics into our NHS – which is facing some of the most significant challenges in it’s history.

I know the public want a health service that they can rely on to care for themselves and their families. But services are going backwards and I know many people are really worried about the future of the health service.  A&E waiting times are at dangerous levels, a quarter of people now wait more than a week to see their GP, and 300,000 fewer older people are receiving social care compared to 2009-10. With a growing and ageing population these problems are set to intensify, and we need an NHS that has enough staff, joined-up services and a focus keeping people well outside of hospital to cope with future demand.

The current Government’s Health and Social Care Act 2012 – which I constituently voted against – did nothing to help the NHS meet the challenges of the 21st Century. It was a top-down reorganisation that cost £3billion, caused chaos by reforming management structure and introduced the wrong values into our health service. The introduction of a competition framework has resulted in fragmentation of services, large amounts of money wasted on competition bureaucracy and has fundamentally put profit before patients within the NHS. This piece of legislation is currently driving a lot of the creeping privatisation in the NHS.

A Labour Government will repeal the laws which have involved millions being wasted on competition lawyers and tendering, strengthen democratic accountability, and bring in tougher controls on hospitals increasing their focus on private patients – to ensure they always put NHS patients first. I am also absolutely clear that the Transatlantic Trade Investment Partnership (TTIP), or any other trade agreement, should not threaten our NHS and other public services. Labour have consistently called for the NHS to be completely exempt from this agreement

Labour has not only committed to protect the NHS – but to improve it, ensure it can meet the challenges of the 21st Century and remain sustainable for the future. We have set out a ten year plan for the NHS that will:

The NHS is Labour’s proudest achievement. But I do not believe that the NHS as we know it will survive another five years of the Conservatives. George Osborne’s recent Budget did nothing about the crisis in the NHS and his public spending plans – which will take public spending back to 1930s levels – are quite frankly unachievable without cutting the health service.

I firmly believe that only a Labour Government will protect the NHS people rely on.