The buses arriving in Northfield on Sunday… 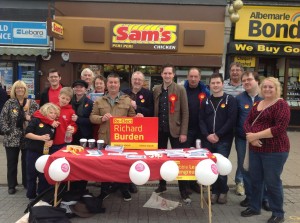 People from the local Labour Party in Northfield were out with me today in support of the NHS. I say “local” because the Conservative Party are holding their national conference in Birmingham and their London HQ is boasting that they are going to bus large numbers of people attending the conference from different parts of the country down to Northfield on Sunday afternoon. Their job, I hear, is to tell people everyone that things are going splendidly and how grateful they should be to messrs Cameron and Osborne.

Somehow, I think people won’t be too happy to be lectured in this way, however many busloads the Conservatives decide to import for the day.

Because local people know for themselves that the reality is different. Working people are an average of £1,600 a year worse off under the Tories. Family energy bills have been allowed to rise by over £300 since the last election. The average age of first time buyers has now reached 33 and house-building has plummeted. Families with children have been hit hard, with childcare costs up 30%. In Northfield in 2009 the number of under 25 year olds out of work for over a year was 25. Now it is 175.

And people know that, whatever the Tories say, the reality is that David Cameron has cut tax for people on over £150,000 a year while raising it for everyone else. They know it is him that has brought in the bedroom tax. They can feel for themselves the effects of David Cameron on Birmingham – hitting our city to the tune of over £140 per dwelling next year, at the same time as leafy Wokingham gets increased support from his Government.

Britain can’t afford another five years of David Cameron and nowhere is that clearer than on the NHS. One-in-four patients are waiting a week or more for a GP appointment. Waiting lists for treatment are at their highest level for six years.

Thousands of frontline NHS staff have been lost while £3 billion has been wasted on a damaging reorganisation they promised wouldn’t happen.

The NHS is about care. It is time that it got support it needs from the Government to provide that care. That’s why on the streets of Northfield today, I was out with our local team in support of Labour’s plan for 8,000 more doctors, 20,000 more nurses, 5,000 more home-care workers and 3,000 more midwives. And for a guaranteed right to a GP appointment within 48 hours. We’ll do it by clamping down on tax avoidance, and by raising tax on tobacco companies and properties worth more than £2 million. We are going to do it because we know the importance of rebuilding an NHS with the time to care.

The Tories will tell you a different story if they knock on your door in Northfield. They are in denial about the NHS and the reality is that they are only bothered about the privileged few. It’s time they heard the voices of the many people treading water, working harder and harder just to stay afloat, and who are worried that the next generation are finding it harder to get on than the last.

The busloads which the Tories import into Northfield will move on. We are here for the long haul. For the many in Northfield and elsewhere. Together.

Say you’re with us. E-mail me at richard@richardburden.com or log on towww.labour.org.uk