Birmingham protest against the bedroom tax

On Saturday (15 June) I joined over 250 protestors outside Birmingham Council House to campaign against the bedroom tax – the impact of which continues to unfold in Northfield, Birmingham and across the country. The protest had been organised to draw attention to the tragic death of Stephanie Bottrill, who committed suicide after the policy made the house she had lived in for 18 years too expensive. 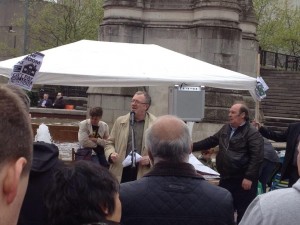 The under-occupancy penalty, or ‘bedroom tax’, is hitting 13,000 households in Birmingham, and over 1300 in Northfield alone. People receiving housing benefit, who live in council or housing association homes with a spare bedroom, face a choice between paying £600 more a year or moving home.

But as I know all too well from my constituents, there often just isn’t a choice. The truth is there aren’t enough smaller homes for families to move to – at least not at a price that people can afford. Many now can’t afford to stay in their home but can’t afford to move.

The real issue is the Government’s failure to solve the housing crisis. We know there has been a 3% drop in house building starts over the past 12 months, and an 8% drop in home completions. That is the lowest peacetime completion figures since the 1920s. No government has managed to tackle this issue fully, but Labour have outlined how we would start. Our policies include:

Labour would bring forward infrastructure spending in houses – to build more affordable homes, reduce the housing benefit bill, create jobs now, and strengthen our economy for the future. But instead of actually tackling the root causes of the problem, the Tory-led Government continues to pursue unfair policies and divisive rehtoric.

When Mick Philpot was arrested for killing his own children in a house fire last year, the Prime Minister and the Chancellor gave interviews voicing their opinions about the link between his crime and welfare spending. When Stephanie died the government said “we never comment on any individual case no matter what the circumstances.” I am sure I am not the only one who finds the contrast in the Government’s reactions to the two cases significant and disturbing.