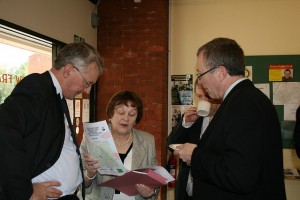 Today I was pleased to welcome the Environment Secretary Hilary Benn to the Northfield constituency. He was here to visit Frankley – one of the local areas severely hit by floods last year. The government has earmarked funds for the area under its flood protection scheme.

During the visit we met with community leaders, Frankley Parish Councillors and staff from Birmingham City Council and the Environment Agency to discuss flood protection work in the local area. Earlier this year the Environment Secretary announced the first round of grants under a £5m government scheme to help people protect their homes against flooding – including £153,900 to protect homes here in the most affected areas of Frankley.

Frankley residents were hit hard by flooding a year ago and I am very pleased that today the Secretary of State was able to see the area for himself and hear first hand the problems people have faced. He said: “This has been a great opportunity to see how the flood protection grant is making a real difference to the local people in the Frankley area by making homes more resilient and protected from the damage and destruction that floods can sometimes cause.”

One of the key messages to Hilary Benn today was the importance of good community organisation to effective flood prevention and response. He met Norma Boyd whose Flood Action Group in the Middlemore Road area of Northfield has pioneered residents’ involvement in flood defence. He met the New Frankley in Birmingham Parish Council and Penny Moore from the Friends of Balaam’s Wood – both are doing great work in their area. He also met local council staff and emergency planning teams whose active cooperation and support is vital to making flood defence plans effective on the ground.

The earmarking of over £150,000 of government money is a real help in protecting some of the most vulnerable properties in Frankley from flooding. The Pitt Review established by the government and the legislation that is coming through also chimes with what we have been saying here in South West Birmingham for many years. But it will take sustained investment to make it happen. As purse strings tighten in the coming years, it is important to remember that the impact of climate change means that floods will be more, not less likely in the years to come. We owe it to the families whose homes are invaded by flood waters to maintain investment in the kind of flood defence which a changing climate demands.